Adminshop – RadioCoins
buy homemade skins (for weapons, shields etc. and figureheads) at the Freeport at Marie. You can get the coins through donations and events.

You can also buy seeds for trees and rare corals at the Freeport at Lilly.

Own server UI as welcome screen

Customizable flag (Company Flag) (100 RadioCoins) and customizable sails (200 RadioCoins) can be bought at Conny in the Freeport, you can have them modded with your own logos. To do this, you need to send us your desired motif after your purchase, preferably in 1024×1024 resolution, via a support ticket in Discord. After the next mod update these will be available in the shop. 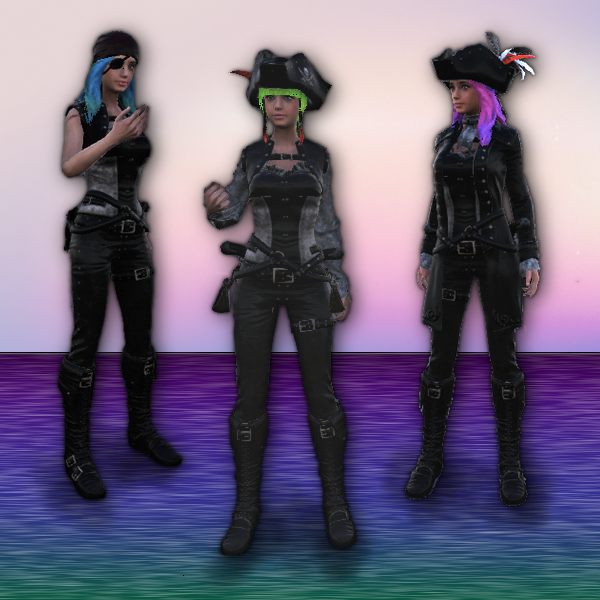 The amount of deco & structures is constantly expanding! Please note that we do not constantly update this list (as of summer 2020!).

Decoration Workbench (learnable under Esotery of Building, crafted in the regular workbench) here you will be able to create all kinds of decorations in the future.

Lamps that turn on and off automatically, no fuel is needed, but the production costs Mythos

Storage Boxes in different styles: Large stack of boxes, which serves as decoration and has 100 inventory spaces. Can be placed on ships.

Jugs can be placed as decoration (no storage space, low durability)

Beer mugs that you can place in your bar as decoration

Bassador (with knocking function), can be placed on any wall!

Decorative barrels that add flair to your harbour and tavern.

Ropes in different variations to decorate your pie

signs with prefabricated symbols that can be placed on the wall

Round table, jugs and the like can be placed on it!

2 weapon stands with “level indicator in form of weapons

3 variants of flags (pirate logo black, pirate logo pink & Radioactive Atlas Logo) these can be snapped to the mast! Unfortunately there are a few additional snap points which make no sense but cannot be removed. The flags should/must be snapped into the crow’s nest.

With our glass production system, it is now also possible to produce placeable, decorative bottles

Gold box, which reduces the weight by half.
It can be placed on ships/on land/on carts and can be picked up again. (Under Piracy – Plunder learnable)
ATTENTION: does not supply your crew with gold!

Ladders that can only be caught and retrieved by the company. (learnable under Seamanship – Shipright)

Dried food for animals. There are 5 variants: fruit, vegetables, meat, rotten meat and fish. All of them will need the skill “Secrets of Cooking” and can only be produced in the oven. They are on 100 Stackbar and have an expiration time of one day. In addition, they do not produce any vitamins, so they cannot be misused as provisions.

Medium Gate, which is as wide as the big gate, but only half as hig

Hammer to pick up structures similar to the Demo Gun of S+ (Ark) – Pickup Hammer.
Learnable in Esotery of Building to maximum.
Shows after hitting in the top center, which structure was chosen (hit) for demolish or pickup.
Please note: only undamaged structures can be picked up, only structures of your own company, you have to hit directly on the object to be picked up and win a mini-game afterwards.
additionally: Demolish Mode, which does not pick up structures but tears them down.
With a right click you can switch between pick-up and demo mode. In Demolish Mode the hammer is red, then hit the structure as usual.

Large Preserving Bags or cabinets where you have more space to store consumer goods and where your meat/fish is not converted to salted meat/fish.

Clipping Wood and Clipping Stone Foundation, Wall, Ceiling & Roof!
These have no collision detection and allow you to build a foundation even on steep cliffs. You can learn about these via Esotery & Secrets of Building

2×2 slanted trapdoor, e.g. suitable to have a bigger hatch on ships!

Improved Grill: Improved grill that has a water reservoir. It has a function to deactivate the autocrafts (frying of meat and fish). Can also be connected to water pipes. Grog can also be produced in the Improved Grill.

Compost box (can be used to store manure and excrement) (can be produced in the Dekobench).

Hitching post which makes it easier to mate animals.

Functional mill with which you can grind flour.
Flour: can be made into bread, but also serves as a wheat substitute (lasts longer, stacks higher, but gives less food).

Placeable submarine hangar for your harbour

Magic Flask (can be produced in a ritual circle)

Whole and half glass wall and glass windows. Can be produced in the workbench

Glass plates for glass structures: can be produced in a melting furnace from crystal, sand and a mould for glass plates

Sand: Can be produced in a mortar of sandstone

Casting mould: Can be produced from ingots and gems in the workbench

Several “optics” for your glass panes!

It’s cold in there? Your glass structures will be covered with frost!
It’s raining at your place? Rainwater will run down your windows.

The small glass window door can be placed on ships! It has its own look that fits into the window frames of ships.
Also the weather effects are represented here!

Trees need fertilizer and water to grow or to be kept alive.

– Craft a Seedling: Create a seedling, plant it, and enjoy the pleasure of seeing a tree grow from this delicate plant. Chance decides which seedling you get.

For all the above you need to unlock the skill Advanced Soil Tilling! Production takes place in the inventory!

All seeds can also be bought at Lilly in the Freeport.

Huge trees, which not only look beautiful, but you can also build on them.
How? With tree platforms! You can make them in the workbench and snap on grown giant trees!

Please note that only 4 trees are allowed per company!

For the start we have 4 giant trees for you, including 2 for RadioCoins and 2 that you can make with 6 different types of wood.

Trees can be created and planted in the Giant Tree Plot (you can learn this in Advanced Soil Tilling)!

Please note that you need fertilizer and large amounts of water!

When the tree is fully grown, the bed will be destroyed after a short time, from then on the tree needs neither fertilizer nor water.